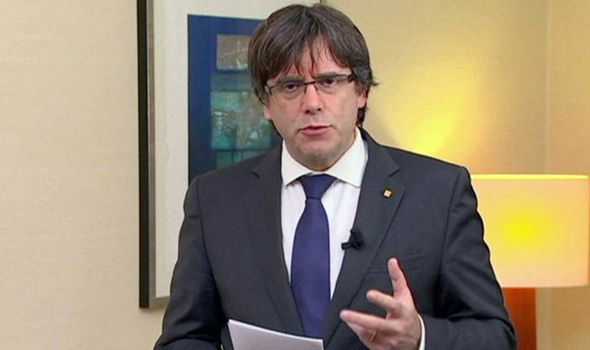 A Spanish national court issued European Arrest Warrants for the five separatist politicians on suspicion of sedition, rebellion and embezzlement on Friday.

Ousted Catalan President Carles Puigdemont, who faced an global arrest warrant for his role in an ill-fated declaration of independence, turned himself in voluntarily to Belgian police on Sunday.

Catalonia's deposed leader Carles Puigdemont called on Saturday for separatists to unite in a December election called by Spain to try to avert a disputed push for the region's independence. He said the Spanish courts "can't guarantee a fair and independent sentence that will be free of the enormous weight and influence of politics".

A European arrest warrant was issued by Spain, where the government sacked him as leader of the region following the independence referendum.

The five former officials are wanted on charges of rebellion, sedition, misuse of public funds, disobedience and breach of trust.

When asked whether he will be seeking political asylum in Belgium, Puigdemont said that he did not go to Brussels for that reason. On Thursday, ex-Catalan Vice President Oriol Junqueras and seven other former regional ministers were jailed without the opportunity to post bail.

Nine other leaders of the Catalan region were taken into custody, one of whom, Santi Vila, has been released on bail for €50,000.

Spanish government spokesman Inigo Mendez de Vigo has said that any politician can stand in the election unless he or she has been convicted of a crime. Belgian federal prosecutors say they could question Mr Puigdemont in the coming days.

The Belgian public prosecutor's office confirmed on Saturday that it had received the warrants, saying a decision would happen within 24 hours of them appearing before a judge.

"If we add the issue of independence, we won't get as many people to support us", said Mas, who was the first Catalan leader to harness the political momentum for secession.

DW reporter Charlotte Chelsom-Pill, who was at the scene, said demonstrators chanted "We are not afraid" as they waited for the return of the six Catalan officials who appeared in the Supreme Court.

Catalonia's Parliament voted in favor of a declaration of independence on October 27.