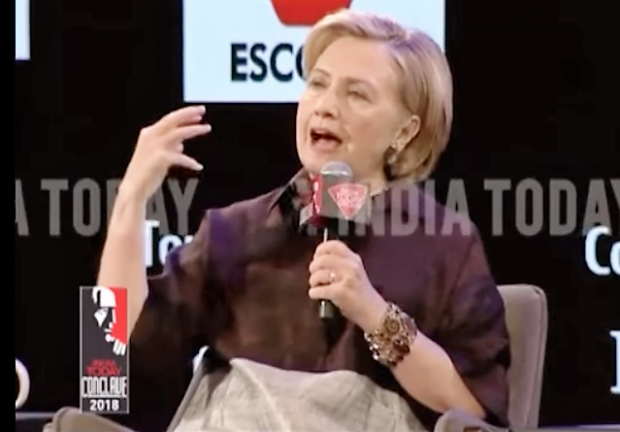 The 2016 Democratic presidential candidate spoke over the weekend at a conference in Mumbai.

Clinton criticized U.S. President Donald Trump, saying, "Anti-immigrant feeling became virulent because of Trump's rhetoric". In her initial "deplorables" comments, perhaps her biggest faux pas was appearing to suggest that as much as half of Trump supporters fit into the "baskets of deplorables" - either because they were racist, sexist, homophobic, Islamophobic and/or xenophobic.

Clinton also noted - as she has before - that the forces of Russian interference that led Trump to the Presidency are still at work around the globe, something that she said "represents a clear and present danger to democracy everywhere".

"It's commonly said that countries deserve the governments they get".

"Just when you think she cant get worse. she does".

Dang Hillary, maybe you should use a scooter or something, although that won't help her with steps.

Clinton was critical of Trump's reality campaign tactics and questioned whether she should have provided more entertainment to voters who responded to Trump's brash style.

Malkin said on "Fox and Friends" that Clinton's remarks denigrated the minds of female voters in red states. "I win the coasts, I win IL, I win Minnesota, places like that", Clinton said. "And his whole campaign, 'Make America Great Again, ' was looking backwards". Whatever your problem is, I'm gonna solve it.

Boy, she really holds a lot of America in totally undeserved contempt.

The incident took place at the Jahaj Maha Place in Mandu, where Clinton lost her balance on more than one occasion despite her aides acting as fulcrums from the sides. It's why Democrats have been losing for years.