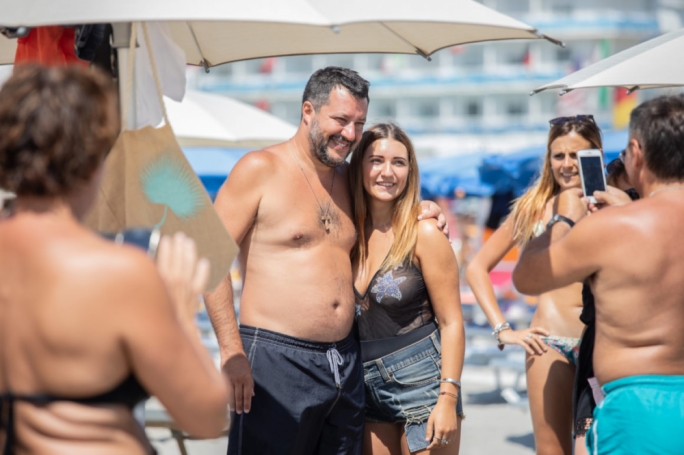 "League leader Matteo Salvini was "irresponsible and opportunist" and showed a "grave lack of constitutional culture" in triggering a government crisis exclusively to cash in on surging poll numbers, Premier Giuseppe Conte said Tuesday, saying the government's action stops here" and saying he would go to President Sergio Mattarella to tender his resignation as premier.

Mattarella will start his meetings at 4.00 p.m. (1400 GMT) on Wednesday and wrap them up on Thursday afternoon. Conte's move is a high-stakes political maneuver meant to stop his right-wing deputy, Matteo Salvini, from gaining even more power.

Mr Conte accused his interior minister Matteo Salvini of attempting to undermine the ruling coalition and endangering the Italian economy for his own political gain.

He described the actions of Salvini, who declared the coalition unworkable 12 days ago and called for snap elections, as recklessness "liable to tip the country into a spiral of political uncertainty and financial instability".

The potential threat became clear when the two blocked Salvini's calls for an immediate vote of no-confidence in Conte last week. Though both groups acknowledge that there have been contacts about a possible government together, they'd make for an uncomfortable alliance, having traded insults and clashed over policy since the last general elections past year.

After Conte announced his intention to resign, Senate speaker Elisabette Casellati told Salvini to leave the government bench and join his party's Senators, where Salvini said: "Thank you, finally, I would do it all again".

Earlier, Conte had blasted Salvini for his "irresponsible" move that has abruptly interrupted the work of the government.

The former prime minister Matteo Renzi has overseen talks between factions of M5S and the PD but they are yet to be endorsed by the PD leader, Nicola Zingaretti, who said last week that a coalition with M5S would be a "gift to the risky right".

The usually soft-spoken Conte last week said that Salvini was "obsessed" with immigration, calling on his deputy to let minor migrants rescued in the Mediterranean disembark from a charity vessel anchored near the southern island of Lampedusa.

In a shock move on August 8, Salvini, leader of the far-right League party, declared that his alliance with the anti-establishment 5-Star Movement was dead and called for elections. Some hoisted "Salvini for premier signs", others held 5-Star banners, while still others waved signs saying "We're with you, Conte".

Salvini has demanded early elections, three and a half years ahead of schedule, confident of sweeping into power as prime minister and pushing the anti-establishment 5-Star into opposition.

The party finished in second place in the 2018 general election, behind his coalition partner Five Star Movement - but new polls show he would now finish in front.