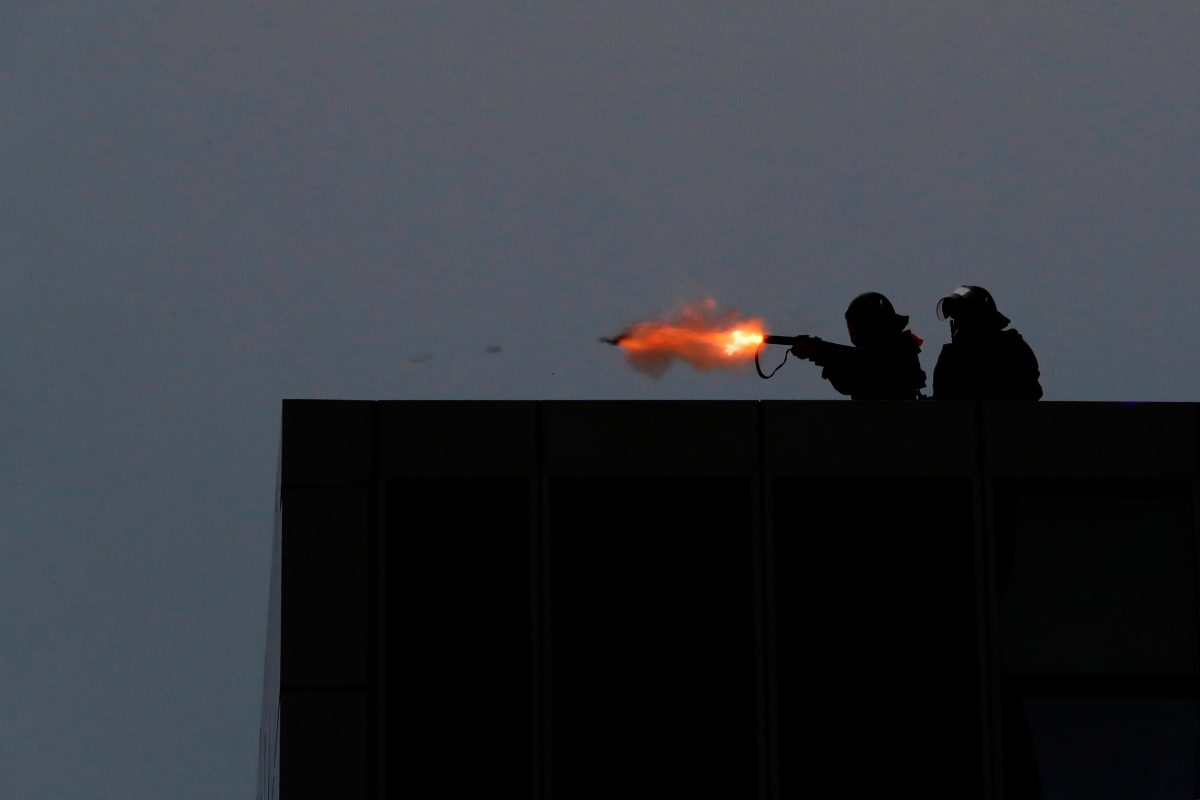 A 60 Minutes team, led by reporter Liam Bartlett has been at the frontlines of the demonstrations, and has filmed confronting scenes showing police using tear gas, water cannon and gunfire to intimidate and disperse crowds. The police also decided not to permit rallies and protest marches scheduled for Saturday. Police erected fresh barricades near the highly guarded Liason Office - the department that represents China's central government - and water cannon were driven onto the streets in anticipation of renewed clashes. Civil Human Rights Front (CHRF), the organiser of the now cancelled march, called on residents to turn on their cell phone torches and yell slogans of the protest movement at 8:31pm local time.

Vickers argues that Hong Kong police's handling of protests has not been egregiously violent in comparison with police in other countries.

The groups are used to post everything from news on upcoming protests to tips on dousing tear gas canisters fired by the police to the identities of suspected undercover police and the access codes to buildings in Hong Kong where protesters can hide.

Protesters pointed laser beams at police and tossed petrol bombs and rocks. There were several arrests. Cheng's arrest was announced by his Civic Passion party, while police said a 35-year-old man surnamed Cheng had been held over "conspiracy to cause criminal damage" linked to the storming of the city's parliament in July.

Despite the cancelation and veiled threats by Beijing, thousands took to the streets for a largely peaceful, meandering rally in the afternoon rain.

The official confirmed that Beijing had rejected giving in to any of the protesters' demands and wanted Lam's administration to take more initiative.

As police advanced east down Hennessey Road, protesters made another stand in the Causeway Bay shopping district. The crowds grew after dusk in Wanchai, where demonstrators built roadblocks and banged iron sticks. Firefighters battled the huge blaze.

There were also standoffs in North Point and Fortress Hill, to the east of Causeway Bay, and tear gas was sacked against protesters over the harbor in Tsim Sha Tsui.

"I have found so many different kinds of people are coming along", she said, her face uncovered and wearing no mask. "Maybe we win, maybe we lose".

Hong Kong has been locked in three months of political crisis, with increasingly violent clashes between police and protesters that have prompted an escalating public relations campaign from China.

By Joe Brock and Farah Master.

In the article, Reuters cited three sources familiar with the matter as saying that Lam submitted a report to Beijing in which she recommended withdrawing the controversial extradition bill, one of five key demands by the protesters, to potentially alleviate the simmering crisis in Hong Kong.

Democratic Party lawmaker Lam Cheuk-ting said Hong Kong citizens would keep fighting for their rights and freedoms despite the arrests of several prominent activists and lawmakers in the past two days, including activist Joshua Wong. Chinese language activists with hyperlinks to Hong Kong and the protests have additionally been topic to interrogation and detention in latest weeks, and some have been positioned below home arrest.

Let's put it in simple phrases: the folk of Hong Kong haven't defeated the proposed extradition regulation to China but - we now have most effective earned a small window to catch our breath. The new wave of arrests sends a strong signal that the Hong Kong government is not going to meet those demands but is instead doubling down on its current approach.