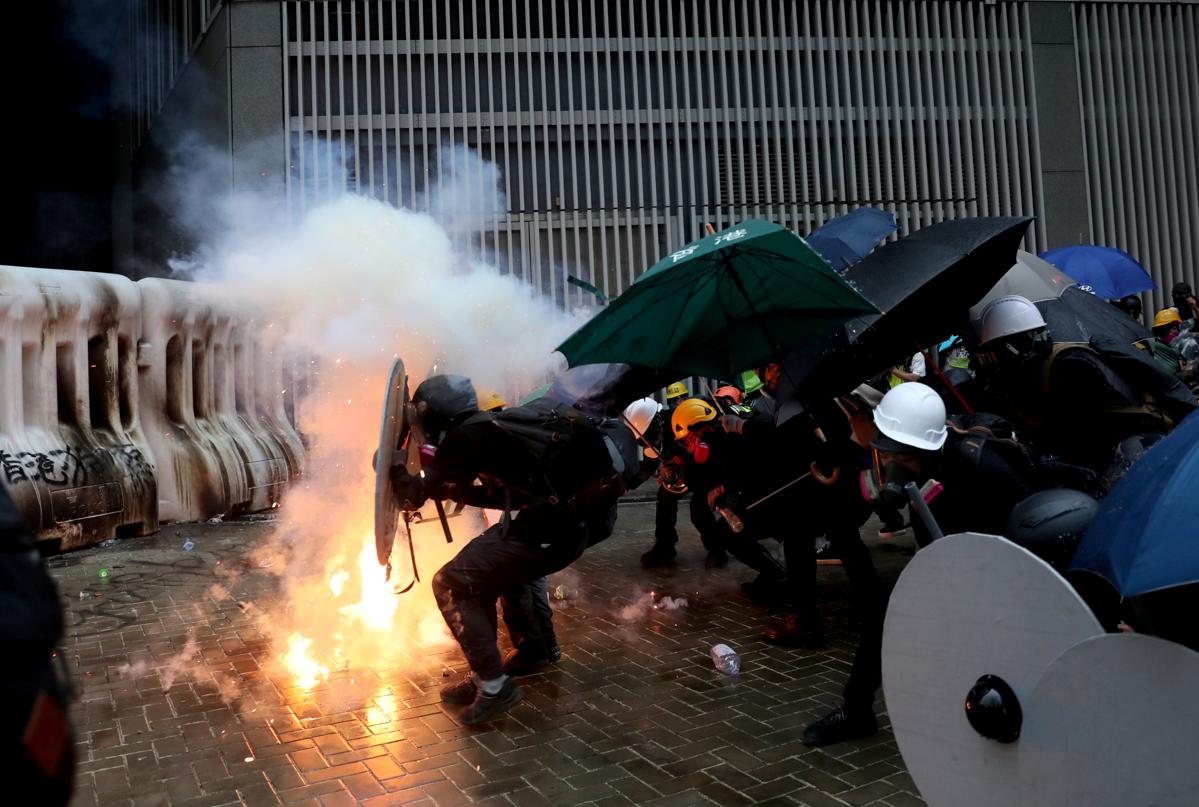 Protesters have repeatedly urged the global community, particularly the British and the USA governments, to safeguard their human rights in the face of increasing instances of police violence against protesters-which have been condemned by rights organizations such as British non-profit Hong Kong Watch.

A total of 63 people were arrested at the Mong Kok, Yau Ma Tei and Prince Edward subway stations, police announced.

Outside one airport terminal, protesters set off fire extinguishers, piled luggage trolleys into makeshift road barricades and smashed surveillance cameras before being driven away by police.

Sunday's demonstration comes after police and protesters clashed overnight in some of the most intense violence since unrest erupted more than three months ago over concerns Beijing is eroding the autonomy granted to the territory when it was handed back to China in 1997.

Moreover, every day of the year some 150 Chinese migrate on average into Hong Kong, in what many Hongkongers believe to be a systematic effort to dilute the Hong Kong population, making it more amenable to Chinese rule by bringing in residents who grew up without the freedoms that native Hongkongers take for granted. It has denounced the protests and warned of the damage to the economy.

Man-Kei Tam, the Hong Kong director for Amnesty International called the railway station beatings "horrifying" and said "such unlawful police tactics continue to inflame rather than de-escalate the situation".

Police put blue dye in the water cannons directed at protesters, coating the road in a blue wash.

Earlier on Saturday, police had deployed water cannon and rubber bullets against anti-extradition protesters as clashes continued through the weekend following a string of arrests of prominent pro-democracy figures.

Protesters gathered after dusk fell next to the Hong Kong headquarters of the People's Liberation Army, shining dozens of green lasers at a barracks building.

The protesters last month staged a sit-in at the airport's departure lobby, forcing the cancellation of almost 1,000 flights over a two-day period.

Hong Kong police fired tear gas at protesters gathered outside government headquarters at the weekend as thousands defied a ban to rally through the city centre, local news channels reported.

Hong Kong police said on Sunday that 63 people had been arrested during the riots on Saturday.

Christian groups - who have added their "Sing Hallelujah to the Lord" chant to the protests since the outset - also held their own "Sinners' March" protest in support of the five demands.

Many protesters relocated to the airport's nearest town, Tung Chung, where they used fire hoses to flood the metro station, sprayed graffiti on its walls, and also burned a Chinese flag.

"On Saturday, the Hong Kong government issued a formal announcement on the matter, replicating that universal suffrage is the" supreme goal", but election reforms will happen" in compliance with the principle of gradual and orderly progress". They came out from the pouring rain regardless of law enforcement prohibit that exposed most of these to possible arrest.

If they become law, the city could lose its status as a separate legal jurisdiction and trading entity, while journalists, visitors, rights activists, dissidents, democratic politicians, and the business community could be targeted for words and actions deemed illegal by the ruling Chinese Communist Party, and extradited to face trial in mainland Chinese courts.

USA congressman on August 31 called for the immediate release of people detained on "politically motivated charges" and for Hong Kong authorities to stop the use of excessive force against protesters.

"I think we're all in agreement that what we hope to see is for peace to be restored in Hong Kong, for the violence to end, for us to engage in a dialogue to find a path forward".

The turmoil has evolved into calls for democracy. China is eager to quell the unrest before the 70th anniversary of the founding of the People's Republic of China on October 1.