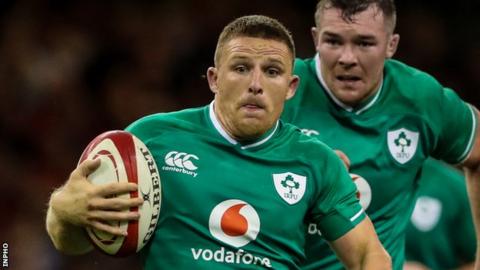 Ireland eased to a 27-3 Pool A win over Scotland in Yokohama on Sunday after a dominant first half in their Rugby World Cup opener.

Even when a momentum shift did appear possible, the Scots still found a way to let themselves down. How they smelled Irish blood without injured star backs Rob Kearney, Keith Earls, and Robbie Henshaw. This was a first-half performance reminiscent of the Garryowen's man's 2018 year in a green jersey.

That plan is all well and good when a match is open or you are chasing things like they were in the draw against England back in March, but when you take on a side like Ireland, you have to play through the phases. But it didn't matter.

Scotland had lost six of the previous seven games against the Irish but scented an upset in Yokohama as coach Gregor Townsend named the most experienced Test team in Scottish rugby history with an astounding 630 caps in the starting XV.

But we have always presumed that there will be people who will miss the [rest of the] World Cup after each game that we play.

They had one more try to cheer before the end as Conway added the bonus point just before the hour.

His team will play tournament hosts Japan in their second game, while Scotland will face Samoa two days' later.

"Obviously with the conditions in the second half it became a bit more of an arm-wrestle but we know how good a team they are and we're delighted with that win".

"We weren't sharp today but what I really liked was the attitude of our players", said England coach Eddie Jones to BBC Sport.

As usual, Scotland was its own worst enemy, committing 12 handling errors and eight turnovers on attack. Ireland was ready to counter.

Scotland center Duncan Taylor's miss-pass into touch gave Ireland the lineout from which Jonathan Sexton led a surge and Ryan scored off a ruck with a helpful shove from Cian Healy. "We have to bounce back and be a lot better against Samoa, carry on against Russian Federation and especially against Japan, who started the tournament very well". That was after 13 minutes. If it wasn't that, then it was tackles like that of Stockdale's on Stuart Hogg that rattled the unsafe Scotland fullback and forced a knock-on. Ireland charged from the five-meter scrum and Furlong ploughed over.

For Scotland, Greig Laidlaw's first-half penalty was their only score.

And the match clinching try which earned them a bonus point came in the 55 minute. That will determine whether or not they've got a concussion.

There was no way back for Scotland, especially not in the rain. "But right here, right now there is a bit of reassurance over those two". Off came Murray, Sexton and Henderson.

Scotland toiled without reward, foiled by a slippery ball and stern Irish defence.

The few times the Scots did threaten in the first half, the Irish cover was there not only to make the tackle but also isolate the ball-carrier and win the decision from referee Wayne Barnes.