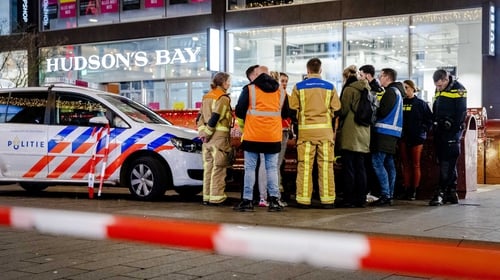 Police in the Dutch city of The Hague have arrested a man aged 35 over a stabbing attack on a shopping street on Friday, in which three teenagers were injured.

"We are keeping all scenarios open", a statement from police said.

All the victims were minors and are receiving treatment in hospital, police said in a statement, adding that their families have been informed.

Police indicated there was no immediate sign of a terrorism motive, but they were not ruling out any possibilities. One said an "athletic" man fled the scene, jumping easily over obstacles. The area was cordoned off and dozens of police and ambulances were on the scene.

Form for signing up for free newsletter. "The man has no fixed place of residence", police said on Twitter.

Police officers work near the site of a stabbing on a shopping street in The Hague, Netherlands on November 29, 2019.

The man, whose identity wasn't released, was detained in The Hague early yesterday evening and taken to a police station for questioning, police spokeswoman Marije Kuiper said.

The US embassy warned its nationals in The Hague to avoid the area because of "reports of a security incident" and told them to let loved ones know they were safe.

Videos and photos posted online showed crowds of shoppers running away after the incident and others being led out of the stores by first responders.

The stabbing took place not far from parliament, which is the seat of government for the Netherlands and home to many global organisations and courts.

The incident happened on a busy shopping street near the Binnenhof, the Netherlands parliamentary buildings.

Police have named the London Bridge attacker as convicted terrorist Usman Khan. The attack was termed to have had a "terror motive".