Two members of US Congress test positive for coronavirus 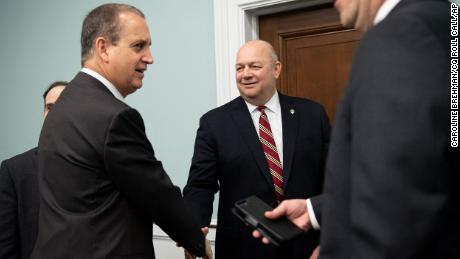 Two members of the US House announced on Wednesday (March 18) that they tested positive for the coronavirus as the government tries to mitigate its spread and protect the endangered US economy.

Rep. Ben McAdams, D-Utah, who has tested positive for the coronavirus, said Thursday that it feels like "worst cold I've ever had" and that any members of Congress who had close contact with him since Friday should be concerned.

Both Scalise and Ferguson said they had consulted with Congress' attending physician.

Almost 9,000 cases of the novel coronavirus have been reported in the U.S., more than 3,000 of them in NY state, according to state health departments. Matt Gaetz and Doug Collins, who each were in contact with a person at the conservative CPAC conference who tested positive for the disease. Sen. Diaz-Balart said he began to develop symptoms Saturday, hours after leaving the House floor.

Representative Mario Diaz-Balart, a Florida Republican, developed symptoms over the weekend and has been working from an apartment in Washington while in quarantine, according to a statement from his office. Miami Mayor Francis Suarez tested positive for the virus last week.

Additionally, the 435 members of the House would have to travel next week to return to Washington D.C.to vote, increasing their chances of exposure to the virus. His doctor didn't think his symptoms - a temperature of 100 and a cough - justified getting tested for COVID-19. He said he isolated himself in his home after consulting with his doctor.

More members of Congress are now going into self-quarantine as a precaution after two fellow lawmakers tested positive for coronavirus. He said he had not returned home to South Florida because his wife's pre-existing conditions put her at exceptionally high risk.

The Office of the Attending Physician sent a memo to all House members regarding lawmakers who tested positive.

Like Diaz-Balart, McAdams didn't indicate whether he had urged any of his colleagues or aides to self-quarantine.