Dead, 150 Injured After Violent Clashes Between Forces And Islamist Protesters

India 312-2 at close, lead Sri Lanka by 107 runs
Yet, when India squared up against Sri Lanka on a green Eden Gardens pitch under overcast conditions, Vijay was left out. Vijay attempted sweep but couldn't control it as much as he'd have liked, the top-edge falling to the short fine-leg. 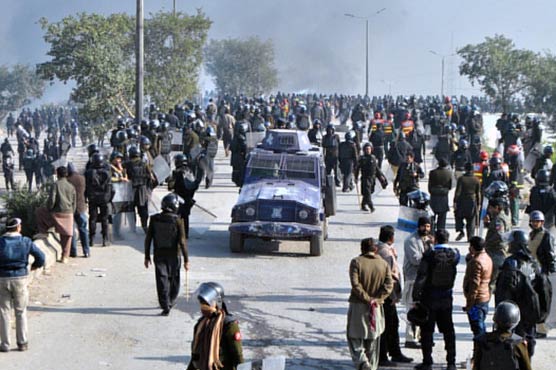 So far one police official was martyred in I-8 Sector during the clashes while almost 200 persons of both sides had been injured.

Pakistan's army chief on Saturday called on the civilian government to end the protest while "avoiding violence from both sides".

The notification issued to summon the army for upholding the law and order in the federal capital has been verified by the interior ministry on late Saturday night.

Roughly 8,500 elite police and paramilitary troops in riot gear are taking part in the clearance operation, which was launched soon after the final deadline of 7am given to protesters expired.

Security forces arrested over 300 protesters - 150 in Islamabad alone - and took them to various police stations across Pakistan. A police officer was killed in action after a rock hit his head. Hamid's residence in Sialkot was also attacked.

The rallies were triggered by a change in the wording of an electoral oath for lawmakers, which protesters claim was done to appease religious minorities they consider heretics.

The government had made several attempts to resolve the stalemate through negotiations with the protesters, who demanded the resignation of a law minister over an omitted reference to the Prophet Muhammad in a parliamentary bill.

There have also been scattered reports that Facebook and other social media sites have been blocked.

At least seven people lost their lives with over 200 injured in the security operation carried out by police, Rangers and FC personnel after more than two-week long anti-blasphemy sit-in by religious parties at the Islamabad interchange. The protest has triggered demonstrators to take to the streets of other cities across the country in solidarity, bringing them to a virtual standstill.

Interior Minister Ahsan Iqbal told state television that the government had shown patience in dealing with the protesters. "They have fired teargas shells (at security forces), they also cut the fibre-optic cables of cameras monitoring their protest.They have inside information and resources that are being used against the state", he told DawnNews.

"Politically driven procrastination has its own costs and this is what the government is paying", analyst Imtiaz Gul said.

Analysts and critics have accused the government of bungling its response to the protest, and allowing a minor issue to grow into a headline-grabbing and potentially unsafe situation.