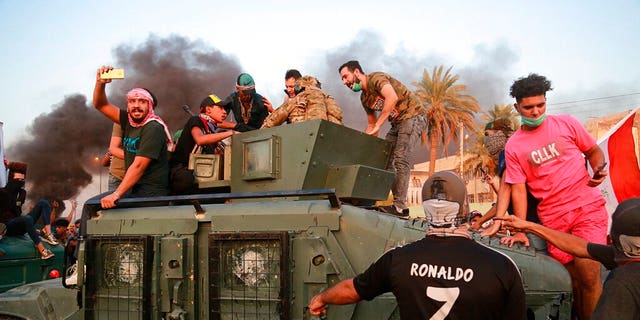 Protests continued on Sunday with several hundred anti-government protesters gathering in a suburb of the Iraqi capital.

Authorities have killed 12 anti-government demonstrators as part of the ongoing protests in the Iraqi capital of Baghdad, the latest fatalities amid unrest that has left more than 100 people dead and thousands injured.

Twenty-six people were killed in clashes on Saturday and Sunday in Baghdad, the police and medical sources said.

The protests, largely led by young people, renewed at the weekend after a two-day-old curfew in Baghdad was lifted early Saturday.

The unrest is seen as Mahdi's first major challenge since he came to power almost a year ago.

The fury erupted on Tuesday (October 1) over unfair distribution of jobs, a lack of services and government corruption.

Anger among the protesters runs deep, and the government faces opposition among parliamentary blocs that have begun boycotting legislative meetings.

The scale of the protests, where nearly 100 people have died as of Tuesday, has obtained the authorities. Reuters could not verify its figures.

Iraqi security officials said Monday that 14 protesters were killed and 62 wounded the previous day, many of them in Sadr City.

Prime Minister Adel Abdul Mahdi's 17-point plan was the result of an emergency cabinet meeting on Saturday night and comes after days of offering only vague reform promises. The deaths in Sadr city added to a toll of more than 100 people killed since the protests began.

"I am ready to go wherever our brotherly protesters are and meet them or send them envoys to other locations without any armed forces", Abdul-Mahdi said. Maan said most of those killed on Friday were hit in the head and heart.

The scale of the unrest appeared to take authorities by surprise.

Discontent has been growing in Iraq in recent years due to rising unemployment and rampant corruption. Iraqis fear the violence will continue to escalate.

He has accused "saboteurs" of infiltrating the protests, a claim echoed by the Hashed al-Shaabi, a powerful network of mostly-Shiite, pro-Iran paramilitary units opposed to the US. In Diwaniyah, at least one protester was killed.

The Iraqi army and police have responded by firing live rounds, tear gas and rubber bullets into crowds.

Firebrand cleric Moqtada Sadr - whose bloc of 54 lawmakers is the largest in parliament - called on the government to resign and for snap elections to be held under United Nations supervision.

Parliament speaker Mohammed al-Halbousi and his two deputies met with a group of protesters on Saturday to listen to their demands.

Hurtado also said reports that three journalists covering the protests were detained and the government cutting off Internet service were alarming and should be examined.