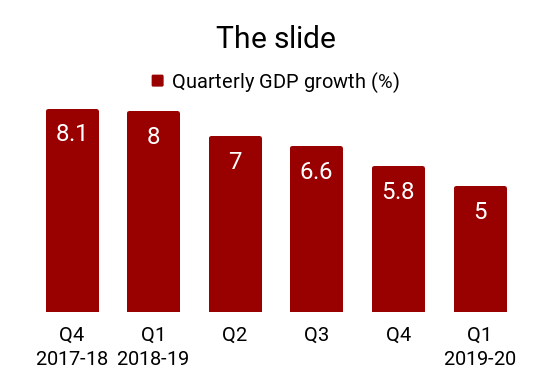 In a big blow to India's economy, India's second-quarter GDP (July-September) numbers stand at 4.5% - the slowest growth in nearly six years, as released by Central Statistics Office on Friday.

However, if the trend continues it is likely that things may get worse, before they get better.

Commenting on the GDP data, Edelweiss Securities' Economist Madhavi Arora: "The GDP growth softened to 4.5 per cent in 2Q - a tad lower than our expectations of 4.7 per cent". In the power sector (October growth at negative 13 per cent), financial viability at the distribution and supply end will have to be structured, "otherwise this is likely to drag generation and transmission into sickness very soon", he said. The Indian economy had witnessed a weak performance last quarter with the GDP growth rate dropping to 5 per cent.

If true, it will be the slowest yearly growth since the Modi government changed the base year for calculating national statistics to 2011-12.

This compares to the budgeted target of 3.3 per cent of GDP, which Finance Minister Nirmala Sitharaman stated in her maiden Budget speech on July 5.

The latest numbers have piled pressure on the government of Prime Minister Narendra Modi, which is already scrambling to revive growth, to undertake additional stimulus measures to reverse the slowdown.

Meanwhile, the government said though growth may have slowed, there is no fear of recession, which is typically defined as negative growth for two straight quarters.

The Indian economy is not showing signs of bottoming out. "Expect GDP growth to pick up from the third quarter".

The release of another dataset deepened the gloom.

For some specifics, look at the core sector data.

"Low investment confidence is clearly reflected in a contraction in fixed investment spending during the second quarter". It stood at Rs 720,445 crore, 102.4 per cent of the full-year estimate. "We need fiscal and not monetary measures". Hence, fiscal policy will have to do the heavy-lifting to boost growth.

The central bank, the Reserve Bank of India (RBI), has cut interest rates five consecutive times this year in a bid to boost lending. "After 135-bp cut delivered by the RBI since February 2019, we expect the RBI to cut rates by an additional 25 bps in December, taking the repo rate to 4.90 percent".

"With a strong rebound in the near term looking unlikely, there is a rising chance that the rate cut that is nearly certain next week will be followed by another in February", Capital Economics said in a research note. Market has been at a higher level than in July.

Now that the government itself is admitting that the fourth quarter came in at 4.5%, the year's projected growth rate could be revised again. But why is the BJP celebrating?