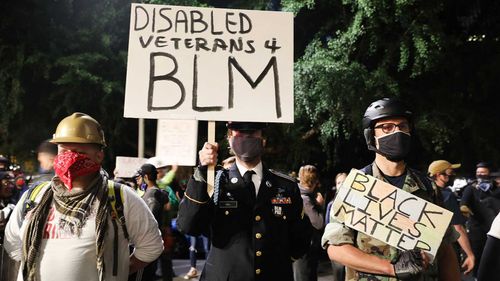 Protests in Portland have now taken place for 60 consecutive nights, and were sparked by the death of George Floyd, an unarmed Black man who died after a Minneapolis police officer knelt on his neck for more than eight minutes. Tear gas was deployed shortly afterwards, they said.

During demonstrations the previous night federal agents repeatedly fired tear gas to break up rowdy protests that continued into the early morning Saturday. Others shot fireworks, banged on the fence and projected lights on the building.

The city has been increasingly marked by violent clashes between protesters and authorities, including federal agents deployed by the Trump administration.

The Portland Police Bureau (PPB) said a crowd emerged outside the federal courthouse, at first peacefully listening to speakers.

The agent isn't named in the account, which was posted early Monday morning and purports to give the perspective of federal officers and agents who are standing on the line to defend the courthouse, which has become the focal point for the OR city's unrest.

Early Saturday evening, speakers at the Frank H. Ogawa Plaza in Oakland, California delivered remarks about systemic racism, police misconduct, and racial injustice before the crowd marched past murals of Black Americans killed by law enforcement to the city's police headquarters, according to the San Francisco Chronicle.

President Donald Trump called the "wall of moms" that formed to protect Portland protesters a "scam".

The agents have worn military-style uniforms with no insignia, snatched protesters into unmarked cars, arrested people without explanation, and shot at protesters at close range with impact munitions.

As the crowd dispersed, someone was found stabbed nearby, Portland police said.

Police said officers used non-lethal weapons in attempts to disperse the thousands of marchers in the late afternoon after some protesters set fire to the construction site for a King County juvenile detention facility and courthouse.

A large group of the more peaceful protesters appeared to react to the smaller group of agitators, by walking over and seeming to try to calm the situation. After that, people started throwing objects over the fence. "In Portland, we are protecting Federal property, including the Courthouse, which wouldn't last a day!" For almost two months, the city has experienced nightly protests against racism and police brutality.

One protester complained that "if we had more notice about the event. a lot more people would be standing in the street right now".